You're aware that Vatican City is home to the Pope and serves as the Roman Catholic Church's HQ. You've even heard about the Sistine Chapel and St. Peter's Basilica. Plus, you religiously watch "The Young Pope," starring Jude Law. So you know pretty much everything there is to know about the place, right? Wrong. For example, did you know you that no one is a born citizen of the country? Or that it has the highest wine consumption in the world—as well as the highest crime rate, though those two superlatives aren't correlated. You might even know that it's governed as an absolute monarchy, so let us impart some information you might not have heard of before. Religious or not, these behind-the-scenes tidbits will enlighten you for your next trip here—or at the very least, give you the tools you need to come first at the next trivia night.

1. Vatican City is the smallest country in the world. 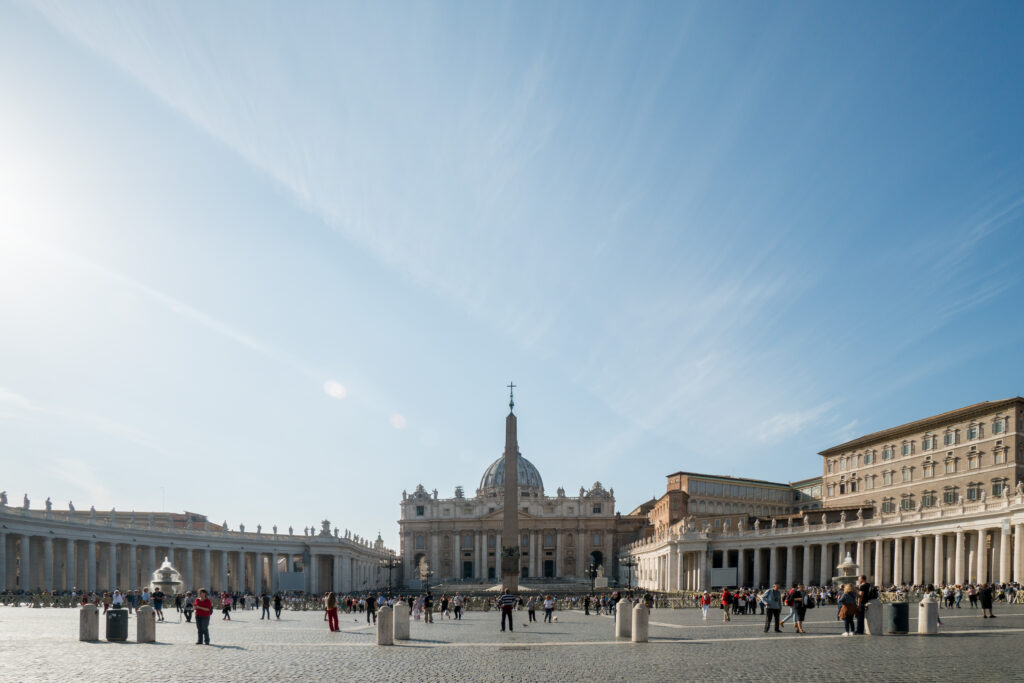 Vatican City takes the title for several superlatives—some claim it houses the world’s most famous artwork, others say it’s the world’s most spiritual place for Catholics. But there’s one thing that’s unarguable and that’s that it’s the world’s smallest country. The independent city-state covers just over 100 acres. That’s smaller than New York City’s 843-acre Central Park, folks. With approximately 842 residents, it also happens to be the smallest country by population. But don’t let its size fool you—it has its own post office (and stamps for that matter), railway station, radio station, flag, and anthem; operates media outlets; and issues passports. It even mints its own euros (coins are embossed with the Pope’s head). That’s about the size of it.

2. Vatican City is younger than you think.

Sure, the Catholic Church has been around for a long, long time, but that doesn’t hold true for Vatican City. In fact, the Italian country only came into existence in 1929 with the signing of the Lateran Treaty, which recognized it as an independent state. Interestingly, it was Benito Mussolini, the head of the Italian government at the time, who signed on the dotted line to make things official.

3. Vatican City is the only country on the UNESCO World Heritage site list.

Italy might have the most UNESCO listings than any country, but Vatican City is the only full country designated as a UNESCO site. It made the cut in 1984. Tip: Get your passport stamped for future proof that you visited the destination that holds this kind of claim to fame.

4. No one is a born citizen of the country. 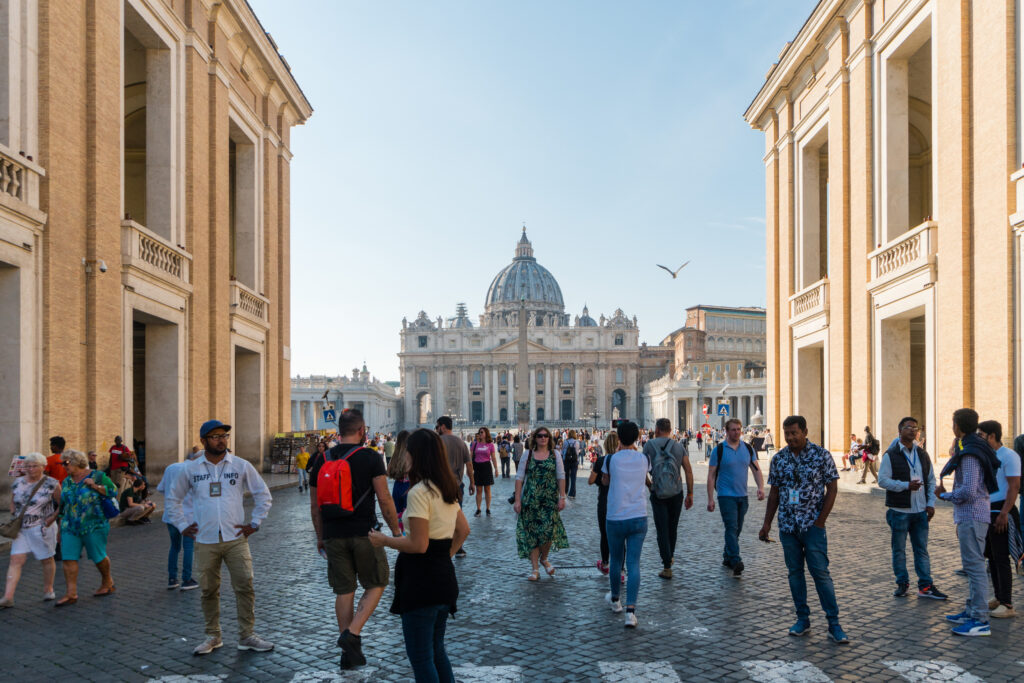 It takes more than being born in Vatican City (or having parents that were born here) to become a citizen. You (quite literally) have to work for it. Here, citizenship is not guaranteed by birth, but appointed to those who are employed in the city-state (think: cardinals and members for the Swiss Guard). And if that’s not enough pressure, there’s more. If you lose your job, your citizenship is subsequently revoked (and those who aren’t citizens of another country automatically become Italian).

Despite its miniscule population, Vatican City manages to come out on top for having the highest consumption of wine per capita. According to recent research conducted by the Wine Institute, an average resident downs 54.26 liters per year. But there’s an explanation for these impressive numbers—it’s said that large amounts of vino are being distributed during communion. Either way, it’s time to up your game, France.

6. The Vatican wasn’t always the Pope’s home base.

Before setting up shop in Vatican City, popes lived at the Lateran Palace on the opposite side of Rome. In 1309, the papal court moved to Avignon in France, and seven popes ruled from there. Upon their return to Rome in 1377, the Lateran Palace had been destroyed by a fire, and the papacy moved to the Vatican.

7. The Pope’s bodyguards are all Swiss.

Established in 1506 by Pope Julius II, the Pontifical Swiss Guard is responsible for the Pope’s safety. To get this kind of gig, your CV must include the following: Catholic, single, male, between the ages of 19 and 30, at least five feet eight-and-a-half inches tall, and Swiss citizen. Individuals must also have basic Swiss military training. For the most part, you’ll see them manning checkpoints and partaking in ceremonies, and with bright blue, red, orange, and yellow uniforms, you won’t have any trouble spotting them.

8. With 1.5 crimes per citizen, Vatican City has the highest crime rate in the world.

But before you cancel your trip, it’s important to note that the majority of crime that occurs here is petty theft. Given the large tourist crowds, Vatican City is a pickpocket and purse-snatcher’s paradise. Some argue the rate is high because it does not have a long-term prison. That’s not to say there are no major crimes. In 2007, the Vatican had its first drug-related crime, after a Holy See employee was found in possession of cocaine. And in 1998, a newly appointed commander of the Pope’s Swiss Guard and his wife were murdered in their apartment.

9. The ATMs in Vatican City speak in Latin. 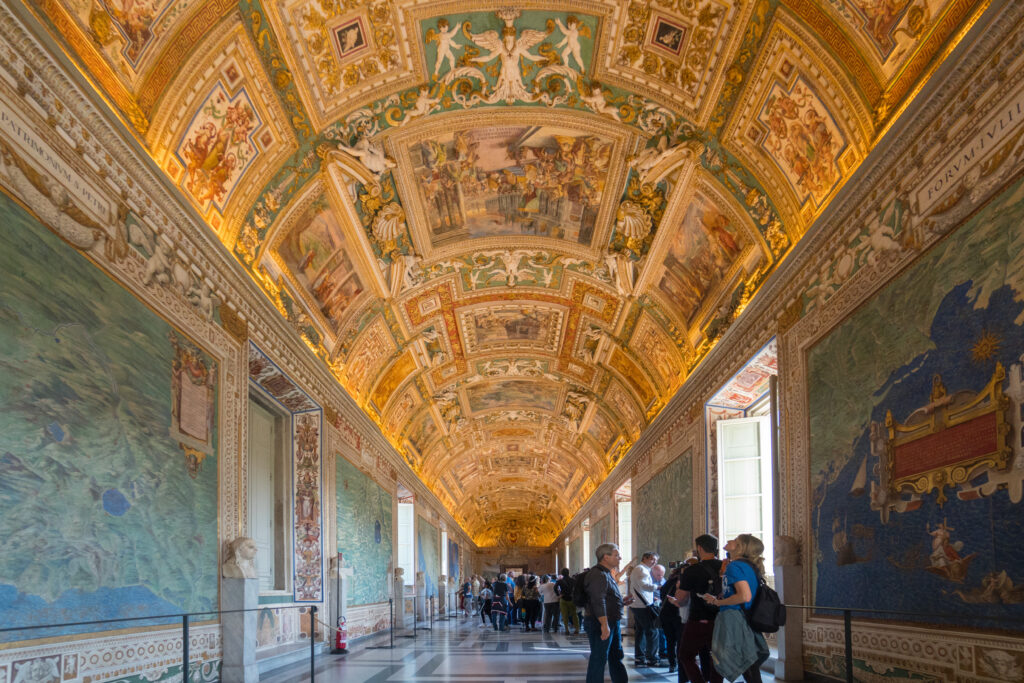 Turns out, all those years you spent learning Latin in school will finally come in handy. The Vatican Bank is the only one in the world to offer ATMs that address customers in the language. Quick tip: when you see “inserito scidulam quaeso ut faciundam cognoscas rationem,” it’s prompting you to insert your card to start. You’re on your own for the rest.

10. The Vatican Secret Archives are not so secret.

Since Pope Leo XIII allowed scholars to visit the Vatican’s Secret Archives in 1881, they haven’t been so top secret. These days, only accredited researchers and scholars are free to glance at the documents and correspondences that lie within the walls. And there’s plenty of reading material—the documents span more than a 1,000 years. But don’t expect a leisurely library visit—browsing is prohibited and visitors must specify what they’re searching for from the get-go.

11. St. Peter’s Basilica is one of the world’s largest churches… 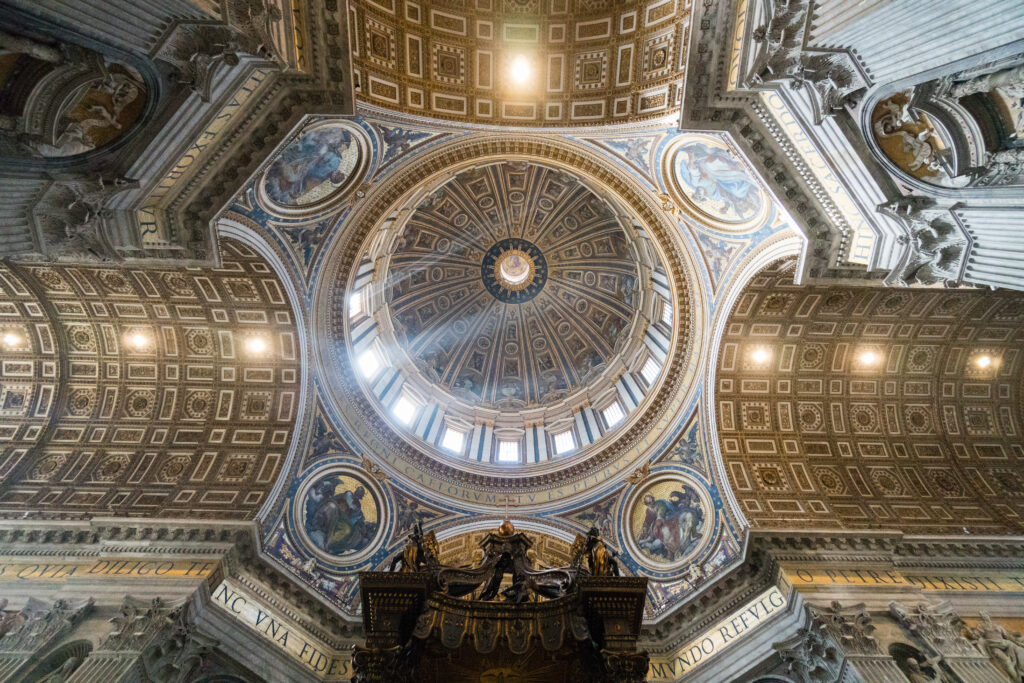 …but not everyone who stops by this sacred building comes for spiritual reasons—the intricate gold details, marble columns, famous statues, paintings depicting divine beings, and masterpieces from renowned artists like Michelangelo (who built the basilica’s massive dome) and Bernini are all major draws for tourists. Some even choose to climb the 300-plus steps to the top for an unparalleled view of Rome. In the center of St. Peter’s Square lies the Egyptian obelisk, an approximately 84-foot structure that was moved to this location in 1586. And what lies beneath the surface is just as fascinating—St. Peter’s Basilica sits over several graves, including that of St. Peter, the original Pope.

12. You can see one of the world’s largest art collections here.

Founded by Pope Julius II in the early 16th century, the Vatican Museums house one of the world’s greatest art collections. The museums shelter approximately 70,000 works—20,000 of which are on display and fighting for a spot your Instagram feed. Approximately four million visitors show up annually to marvel at highlights like the Michelangelo-painted Sistine Chapel ceiling, Raphael Rooms, and the Museo Pio-Clementino, to name a few.

13. Michelangelo wasn’t thrilled to work on the Sistine Chapel in Vatican City. 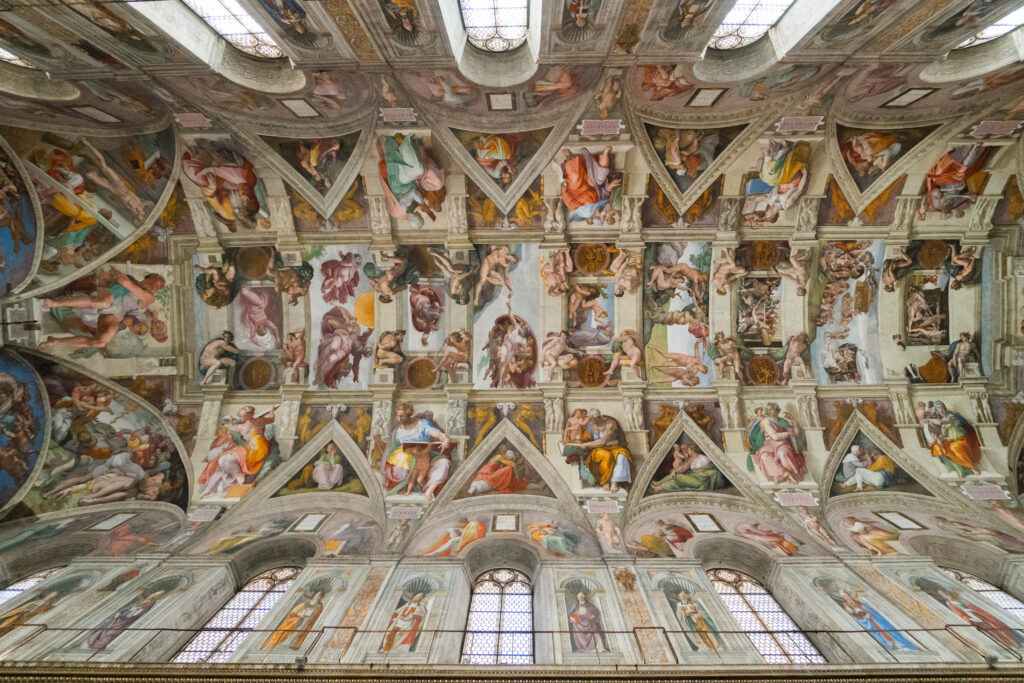 Michelangelo was in his thirties and working on Pope Julius II’s marble tomb when he was asked to decorate the Sistine Chapel’s ceiling. Interestingly, he didn’t jump at the opportunity. In his defense, he considered himself a sculptor, not a painter. Still, he accepted the task and spent years crafting the legendary frescoes. Even more impressive is the fact that Michelangelo and his team used scaffolding to paint the ceiling while standing up. Today, the chapel is where elections for the new pope are held.

14. Wednesdays are your best shot for spotting the Pope.

While there are several opportunities for a Pope sighting, every Wednesday around 10:30 a.m., he rides through St. Peter’s Square and addresses the public in many languages, concluding with a blessing for people in the crowd. Tickets are required, and information about reserving them can be found here. You can then pick up your tickets from a Swiss Guard at the Vatican’s Bronze Doors. They also often have extra tickets for those who forgot to reserve a spot. It might just be the highlight of your trip.

Our Pick for a Hotel Near Vatican City: Hotel Alimandi Vaticano 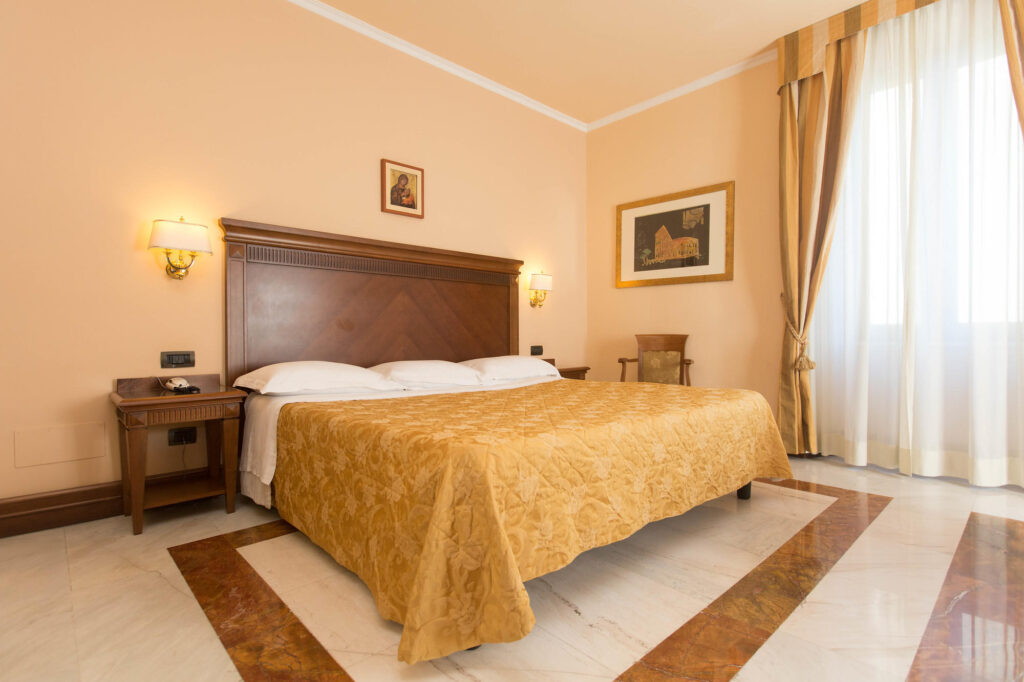 With a prime location in central Rome, Hotel Alimandi Vaticano can be found just opposite the Vatican Museums, and a 12-minute walk from St. Peter’s Basilica. Housed in a neoclassical building, the 24 spacious guest rooms are tastefully decorated, and the public spaces are equally elegant. However, the hotel’s crowning feature is the large terrace on the fourth-floor rooftop with views of the Vatican. A free hot breakfast buffet and Wi-Fi add to the property’s overall value.

Our Pick for a Hotel in Rome: Boutique Hotel Campo de Fiori 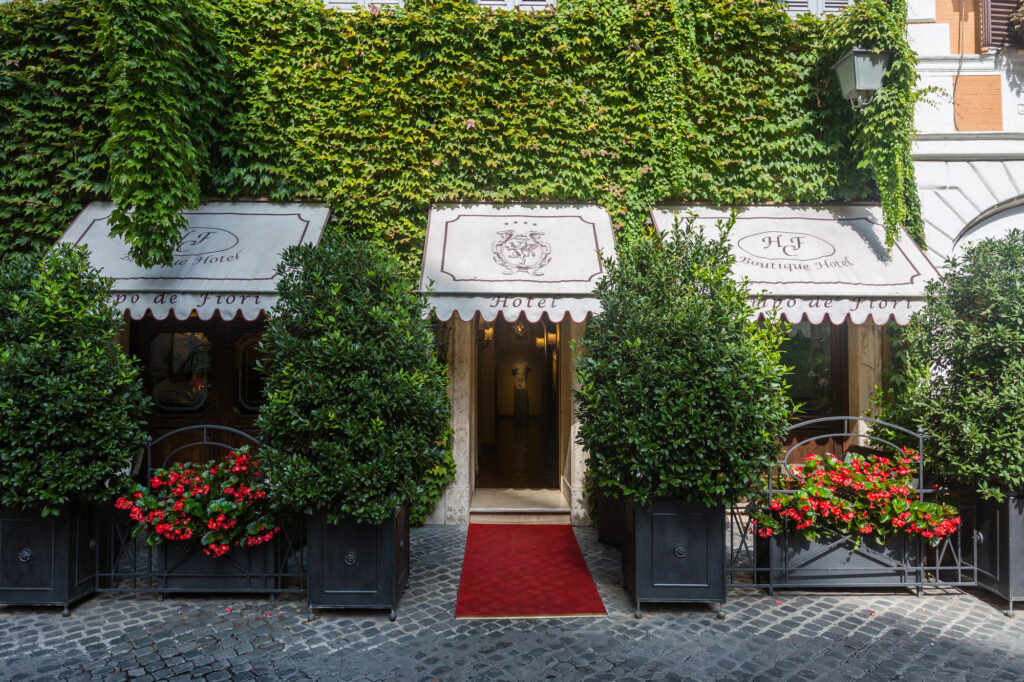 If you prefer to base yourself within easy walking distance of central Rome’s major sites, and drive to Vatican City, we recommend Boutique Hotel Campo de Fiori. Once a bordello visited by priests (you can find preserved details from its former life throughout), the centuries-old property is around the corner from Campo de’ Fiori and plenty of trendy boutiques and restaurants. To top it off, the rooftop terrace is spectacular and has views of nearly every landmark in Rome. The property also offers a great free breakfast with espresso, croissants, and chocolate.

What to Wear in Vatican City: A Dress from Reformation

When talking Vatican City, a flowy dress is almost always the move. Though, make sure it passes your knees–and you should likely pack a cardigan or scarf as well to cover up when indoors.